Sleep Apnea in Women vs. Men 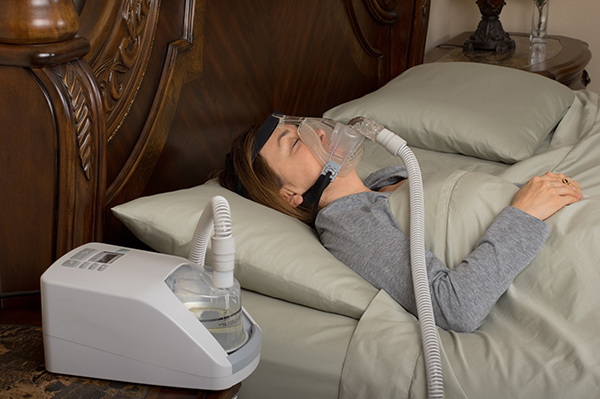 Obstructive sleep apnea (OSA) is a disorder that impacts your sleep by causing your breathing to become shallow or even briefly pause throughout the night. For some, these problems can happen multiple times each night, which severely reduces their ability to obtain a restful night’s sleep. It’s caused by obstructions in your airway, which causes your body to work harder to regulate breathing. When this happens, it’s common to experience a sudden gasp for air, which often only goes noticed by others.

Anyone can suffer from sleep apnea, including children, and its symptoms are not always easy to spot. As the public becomes more aware of sleep apnea, many people have learned the signs associated with it. However, it’s important to understand that there is a difference in sleep apnea in women compared to men. Learn the importance of understanding sleep apnea and the difference between what it means for men and women.

One of the biggest differences between men and women with obstructive sleep apnea is the frequency that women will go undiagnosed. Symptoms of sleep apnea are different for men and women, and many of the noticeable symptoms are more easily identified in men than women. Individuals with sleep apnea suffer from common symptoms like snoring and breathing problems while sleeping, but in many cases, they’re more subtle and difficult to notice to women. It’s estimated that for every three men diagnosed with OSA, only one woman is diagnosed.

Waking up in the middle of the night gasping for air is a likely sign of sleep apnea in men, and it’s often discussing these types of symptoms with their doctor that helps them diagnose the issue. However, for women, it’s more likely that they will report fatigue, headaches, insomnia, or mood complications. Because these symptoms are applicable to a wide-range of illnesses, it leads to frequent misdiagnosis. Many women suffering from sleep apnea instead are treated for everything from depression to anemia.

Your dentist is likely to be the first one to notice signs of obstructive sleep apnea. If they do, they will be able to make recommendations on how to confirm a diagnosis of sleep apnea with your physician. Once a diagnosis is confirmed, we can help you find the best way to treat it.

It’s common for those diagnosed to have questions about sleep apnea, but the most important one is “how harmful is it?” While you may think the biggest problem surrounding sleep apnea is its interference with restful sleep, it’s actually the serious effects it has on your overall health. In addition to causing noticeable short-term symptoms like fatigue, headaches, and mood disturbances, OSA increases the chance of life-threatening health problems. Untreated obstructive sleep apnea can make you more likely to suffer from:

Based on a 20-year study, it was found that those with moderate-to-severe sleep apnea were up to four times more likely to suffer from a stroke. This is because of sleep apnea’s effect on the heart, which can lead to various forms of cardiac issues.

In addition to being harder to detect in women, the negative health effects of sleep apnea appear to be more pronounced than in men. In a study of men and women with sleep apnea, when subjected to physical tests, individuals with sleep apnea had lower and delayed heart range changes compared to healthy individuals. The researchers also noted that the effect on women was much greater than men, leading to the concern that sleep apnea in women has a higher propensity for leading to heart disease than men.

One unique issue with OSA for women is pregnancy, which increases the likelihood of developing sleep apnea. In addition to the typical health concerns, sleep apnea in pregnant woman results in a higher possibility of gestational diabetes and preeclampsia, which are both dangerous for the baby. One study found that women with sleep apnea were up to twice times more likely to need a cesarean delivery versus those without.

Sleep apnea treatment is important to improve your quality of sleep and prevent these serious health issues from developing. While symptoms and diagnosis of sleep apnea varies between men and women, the treatment options available are the same for both. After you’ve been diagnosed with sleep apnea, you have a few options of how to proceed:

The most commonly known treatment for sleep apnea is CPAP. This treatment uses a bedside machine to deliver pressurized air through a tube into a mask that splits your airway open. CPAP is one of the most effective nonsurgical methods for treating OSA, though it does come with some additional risks. Some of the most common concerns of CPAP are dry nose, sore throat, abdominal bloating, and congestion issues. Many individuals undergoing CPAP treatment also report severe discomfort with the mask.

If a CPAP doesn’t work for you, or if you’re looking for a more convenient option, oral appliance therapy may be a better solution. With this treatment plan, a custom mouth piece is designed to fit your mouth that repositions your lower jaw, tongue, soft palate, and uvula while your sleep, creating more airway space. Many patients find oral appliances comfortable and easy to wear, especially compared to a CPAP device. They’re also far easier to use when traveling due to their compact size.

If you’re interested in finding out more about this popular solution for obstructive sleep apnea, schedule a consultation today.

One available option for most cases of sleep apnea is surgery. There are a variety of ways that airway obstructions can be treated through surgery, and a consultation with an ENT is your best course of action if you’re interested in this treatment option. The best candidates for this are individuals who are interested in avoiding the need for CPAPs or appliances, or who cannot use them for any reason.

Of course, like any major medical decision, the additional costs and risks of surgery should be considered before pursing this option. If you have sleep apnea and are thinking about surgery, speak with your physician or an ENT to find out more information so you’re fully informed before making this big decision.

Pointe Dental Group can provide you with a complete examination, answer your questions, and discuss your treatment options. Schedule an appointment with us today! New patients can receive FREE comprehensive exam and consultation, plus a full panoramic x-ray with a paid cleaning procedure (a $200 value)!