The Facts About Periodontal Disease 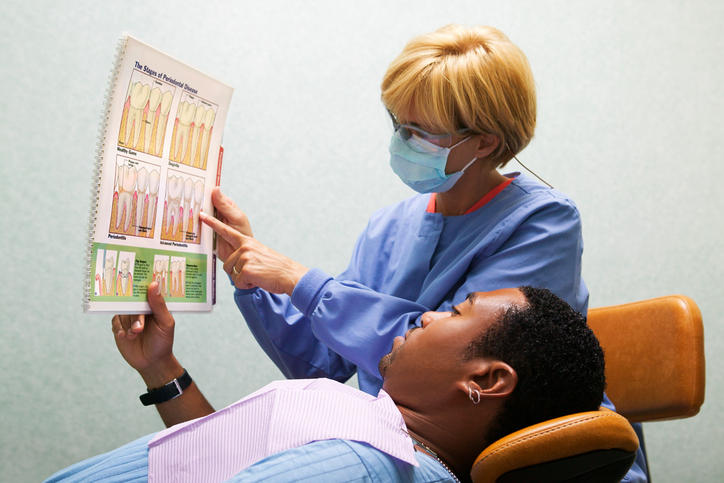 When it comes to gum disease, what you don’t know can hurt you! Periodontal disease not only affects your dental health, but scientific research reveals that it can have devastating effects on your overall health. October is National Dental Hygiene Month, and there’s no better time to brush up on your dental hygiene habits and stop this disease in its tracks. Let’s take a look at what causes periodontal disease, the health issues it can cause, and how you can prevent it.

Periodontal disease – also known as gum disease – is caused by a buildup of bacteria known as plaque. Plaque is sticky, and reforms on your teeth soon after you have brushed. Your body’s immune system constantly battles to get rid of this bacteria, but in doing so, it releases substances that inflame and damage the gums. Swollen, bleeding gums, are sign of gingivitis – the earliest stage of periodontal disease). If left unchecked, gingivitis can turn into advanced periodontal disease, which can eventually lead to tooth and bone loss, among other health issues.

What Are the Effects of Periodontal Disease?

In addition to the damage it can do to your teeth, gums, and jaw, new research links periodontal disease to other health issues, including:

How Can You Prevent Periodontal Disease?

The best way to prevent gum disease is to do exactly what dental professionals have been telling you to do for years: Brush twice a day (for at least two minutes), floss daily, and see your dentist twice a year.

Now you may be thinking, “Didn’t I just hear about a government report that said flossing isn’t necessary?” Let’s set the record straight. Yes, the US Department of Health and Human Services removed a recommendation for daily flossing from its 2016 dietary guidelines, citing that the effectiveness of flossing has never been satisfactorily researched, as required. (This followed a request from the Associated Press to provide evidence under the Freedom of Information Act.) A statement issued by the American Academy of Periodontology acknowledged that most of the current evidence fell short because researchers had not been able to include enough participants or “examine gum health over a significant amount of time.”

But that doesn’t mean flossing isn’t necessary. Flossing breaks up plaque between teeth and under the gum line – places where your toothbrush can’t reach. This prevents plaque from taking up residence in your gums and on your teeth, and wreaking havoc with your dental (and overall) health. Flossing is a quick and inexpensive way to help stay healthy, so we recommend you keep on flossing!

The dental professionals at Pointe Dental Group can answer all your questions about periodontal disease and how you can prevent it. Schedule an appointment with us, or call and take the first step toward keeping your gums healthy.

Don’t miss a thing! Connect with us on Facebook.